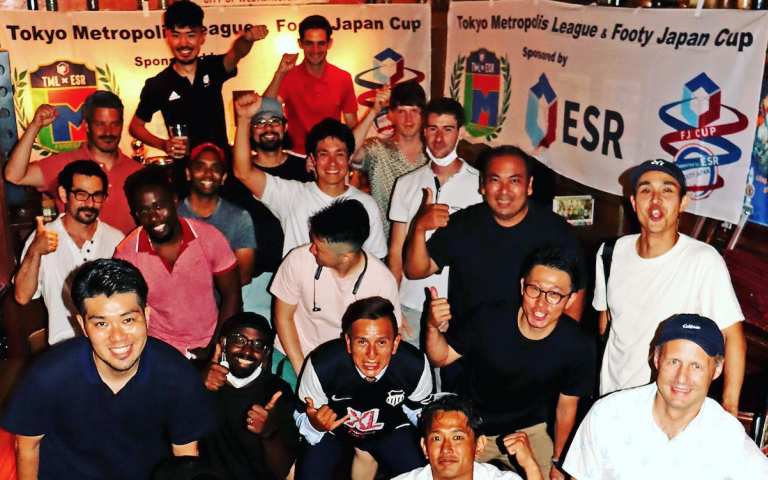 July 3rd had the final fixtures of TML19 played. The captains meeting was held that very night. The meeting consisted of talks about the league, mainly focused on manager duties and rule changes to the league. The start date of the new season was also mentioned, which will be on the weekend of August 27/28.
The will be the leagues 20th season. It goes without saying that the landscape when the league was first formed has radically changed. However the vision has remained the same. As written by the past operations managers on the "about" page, (http://www.footyjapancompetitions.com/about-footy-japan-competitions) the league serves "to provide an organised, competitive football infrastructure for the international community of Japan" and "to enhance international relations through football".
But such goals can only be accomplished with the cooperation of the team managers. When teams are unorganised and have no international showing within them, it inevitably drags the league further away from its goals. This is certainly a trend that has been observed by many of the long time players of the league and has been noticed by footyjapan officials as well. But very little has been done about it and very little can be done about it from footyjapan's side. To reiterate, team managers play a pivotal role in how the league is presented.
If multiple teams forfeit through out the season, players participating in the league won't feel like they are being provided "organised, competitive football" (it's not organised if clubs can't field a team out).
If multiple teams have an overbearing reliance on using cross division players, players participating in the league won't feel like they are being provided "organised, competitive football" (there is no competitive integrity if teams are relying on another team's players).

At times, it just seems like the TML is providing football. Not organised football, not honorable competitive football, just plain old football that you would expect from a pickup session (random players playing with each other for the first time, little to no team spirit). While there is nothing wrong with wanting to participate in pick up football, we'd like to see more from a club that participates in a league. Clubs should have their own unique identity, there should be team bonding, there should be recognizable core players present at most of the games. We understand that it is a lot of work for the captains. But it is crucial work, the work that makes the difference between a pickup session and a league game.
Participating in an official league of any activity means you get to play with a fixed team over the course of the season. This is an experience that cannot be replicated in pickup football. If captains are not keen on having a solid core of committed players and are OK with having a different squad every match, then it would make more sense to join pickup football sessions rather than a league.

As mentioned, it has been 20 years since the league started. Times have changed. Methods of collecting players have changed. In my honest opinion and experience, it is very easy to collect players through social media and websites. They might not be committed, or might not be up to the standard of the division you are playing in. But getting bodies out on the pitch has never been easier. Getting them to commit to the season is a whole different issue. Just like how it is easy to find players through social media and websites, players can find plenty of alternatives to play football using the same means.

This is where the manager plays a role in ensuring those players commit to their team. By having a unique identity (group of lads that love to drink and play football, group of foreigners all from a particular country, group of guys that all live nearby etc) you have a much higher chance of getting players to return to you. Players will find it difficult to commit to a team that always seems to have different players, and consequently, always seem to have a different identity. If the team itself isn't committed, to who/what is the new player joining committing themselves to?

In the long run, managing an uncommitted group of players will be more work. Every other game, you will lack numbers and have people dropping out leaving you scrambling around for players. If you form a core of committed individuals, the team runs itself.

Random preregistrations/cross division players are a short term solution that don't contribute to a long term team bonding. Teams will encounter moments where they do need to make the emergency callup from another division, but that shouldn't be a consistent theme throughout the season. Cross division players have been making an increasing amount of appearances in the league, leaving very little competitive integrity in D2, D3.

Given this, we will have the following new rules enforced.

- Registration of cross division players limited to 6 per team (the highest suggested number by the managers themselves) for the entire season.

This means if a Pumas player (D1) plays on Guapo (D3), that means Pumas and Guapo both have 5 more players they can register from other divisions.

6 is a very lenient number, as that can mean a team can field 6 players from another division for a match which is over half your team. It's also the highest number that was suggested by the captains themselves so technically it's the most generous number the league could have chosen.

This does require the managers need to be aware of where their players are playing. It's concerning how many managers have no idea what their players are up to, indicating just how little interaction they have with those players. It's a bit self centered to not be interested about the players that are playing for your club, but then expect players to be interested about playing for your club.

To some, this might sound like a ridiculously high number I am suggesting. Some might think setting such a high number doesn't change a thing. And for some clubs, it doesn't. But it does affect the teams that have been greatly ineffective at building a core the past few years. We want to gradually wither away a team's reliance on cross division players, so we are introducing small rule changes instead of big ones.

The end goal should be for clubs to have little reliance on cross division players. Ideally, all clubs should have "teams"... not squads of borrowed players from other clubs in different divisions.

I've mentioned the problem of cross division players first in 2019 (http://footyjapancompetitions.com/news/announcements/tml-update-hallowee...) which was three years ago. Emails were sent to managers, urging the need to build a core. Over the past two years, there were warnings that rules would be changed. So the rule change should not be a surprise, given that there was plenty of foretelling and given that it is a healthy direction for any competitive league to head towards. I can only hope that the managers have made the sufficient preparation over the year to adapt to the new rules.