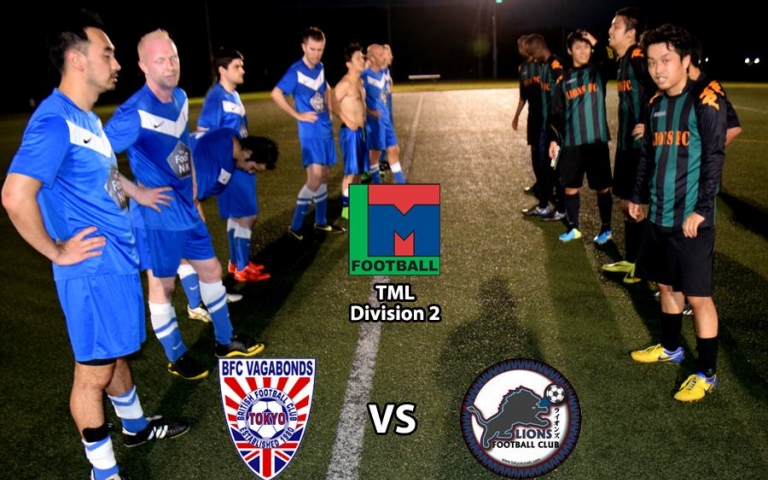 Looking to continue their fine run of form after last week’s victory, the Vags found themselves a goal down within the opening minutes of the match. Some nerves and miscommunication between the Vags players allowed for a deflected ball to bounce out to a Lions striker just outside the box. He made no mistake and hit a first time volley with the outside of his foot which curled into the top corner.

After that shocking start, the Vagabonds began to give better account of themselves, not allowing Lions advantage in possession to materialize into any serious goal scoring opportunities. Coffey and Thong were able to deal with the constant change of field that Lions were employing and the lofted through balls that became a signature of the first
half were comfortably collected by Stieber in goal or cleared away by Glenn and O’Connell.

Although Vags were playing a decent football and stringing a number of passes together, they were unable to make any serious headway past the opposing defense. Halfway through the first half, resorting back to past tactics, Vagabonds struck twice in as many minutes against the run of play. Glenn struck a long ball out of the Center Back position and Ozeki was able to run on and beat his defender. Holding the ball up allowed Grønsund to meet Ozeki’s driven cross with a header past the frozen Lions’ Keeper. In an almost mirrored play to the first Vags goal, a long ball over the top this time allowed Miyasaka to beat the Lions’ Left Back for pace and a calm squared ball across the box gave Williams the entire goal to shoot at and he dutifully finished.

Sadly the lead wasn’t to last as two quick fire strikes from Lions FC saw them regain the lead before half time. A miscommunication and unlucky bounce saw Glenn and Stieber collide, the ball bounce off the post and Lions FC were able to walk the ball in. Seeming to gain confidence from the goal, Lions quickly regained their composure and began to hold onto possession for long portions of the match. A through ball to the penalty spot allowed for a Lions FC striker to nip in behind the defense, round the keeper and gave Lions the advantage going into the break.

Beginning the second half, Vags were much more composed and the midfield was ableto control the flow of the game for brief periods of time. More importantly still, May, Bortnik, Etherington and Williams were stopping the build up plays before Lions were
able to pressure the Vagabonds backline. A few fouls throughout the second half continued to break up the play and neither team was able to gain much of a foothold. As the game continued, Vags began to flag and Lions FC were able to control more of the ball. Unfortunately for them, they were unable to do much to get past Ryan at his Left Back position and through balls from the other flank were easily dealt with. A few solid saves from Stieber held Lions to just a one goal advantage throughout the second
period.

Continuing the match trend, the Vags were able to strike from a quick counter against the run of play. A quick break by Ozeki, who was giving the Lions Left Back a rough day throughout, was rewarded by a flowing move through to Grønsund and finally to Williams who was able to finish under the keeper to put the Vagabonds on pace for a point from the game in which they had chances but weren’t seeing much of the ball.

Only moments later, the Vags were hit back again as a short corner wasn’t fully cleared. After a bit of Lions interplay following the set piece, the eventual match winner was able to dribble along the top of the Vagabond’s penalty area and struck a fine goal into thefar side of the goal.

Although some time remained and the Vagabonds pushed forward, they weren’t to be rewarded with their last few chances, as Miyasaka shot across the face of goal and Williams screwed a half volley wide. When the Lions gained the ball back, Vags continued to tire as they chased their opponents down. Finally at the end Lions were able to hold onto possession and run down the final few minutes, leaving Vagabonds on 3 points through 3 matches.

Next up for the Vags is an early kickoff against Syu Syu Aoyama at Shigaku on Saturday October 10.

Written by The secret Goalkeeper.