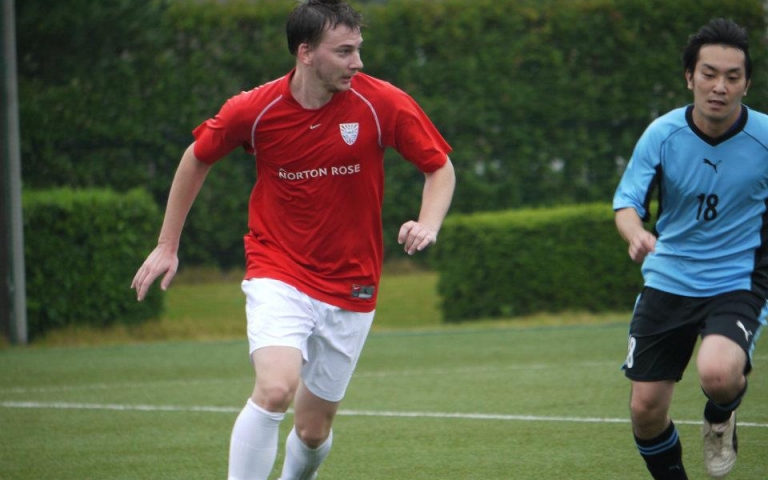 Saturday’s game was billed to be the swansong for one of the Vag’s longest serving players – James Musgrove a.k.a. Muzzy who was leaving Japan for the UK the next day. Perhaps it is a taste of things to come but any chances of turning out for the Vags were scuppered when the job of cleaning the apartment before moving out trumped any thoughts of goal-scoring glory.

Still, whatever the result of the game, and whether Muzzy was there or not, Muzzy deserves a special mention and will always have a special place in the Vag’s hearts. If we had one — he’d be in our Hall of Fame and if you’ve ever seen some of the clobber he wears on a night out, there a case for his inclusion in a Hall of Shame too.

Goal-scoring was the main problem for the Vag’s in Season 12, finishing with the fewest goals of any side in Division 2 and Muzzy’s loss is not going to help with this. Season 12, with the exception of the runaway winners Kanto Celts, also witnessed one of the tightest finishes in the league’s history and this year’s early results suggest a similar pattern is likely to emerge in Division 2. As a result, Vags, with its defence knocking on 180 years old at times, are already considering themselves potential relegation fodder and went into this, only their second game of the season, considering it a potential six-pointer.

That old “Which team are you” chestnut

Another aspect of Division 2 is the fact that quite a few teams are giving run-outs to some of the best Division 1 players sometimes making fixtures appear “Division 1 Lite” rather than Division 2. In fact,‘ringer’ alarm bells sounded early on when a young, athletic-looking, six-foot tall Japanese guy appeared asking some Vag’s players what team they were before the game. It turned out he was the new King George keeper but this rattled the team somewhat early on.

Despite such worries, any reservations evaporated quite quickly as the Vag’s took a 4-0 lead within 20 minutes which was as much as a surprise to them as anyone. Early pressure came from some minor fouls from George with Vags gaining a series of free kicks which Vag’s player-manager Steve Glenn floated into the box. After the team failed to convert two of these, Michael Rowlands, returning after a year out with a cruciate ligament injury, touched neatly home for a goal on his first game back.

Vags dominated this first quarter building on a platform from the back with Coffey, Ryan, O’Connell, Hughes and Thong all involved in switching play in order to profit from the space on the opposite flank. Meanwhile, Stieber in goal provided accurate distribution and dealt comfortably with any George attacks that materialised mainly as whipping crosses which he gathered securely.

Attacking-wise, Vag’s wide men found a lot of space down the flanks that was used well by Ozeki, Kishi and Rowlands while Williams and Naoya provided a solid platform from which to build from in the middle. It was on one of these forays that a shot came in that the George keeper could only parry and the ball was picked up and slotted home by Grønsund. Shortly after this, Grønsund, pressurising the George back line forced an error and the ball was picked up by Kishi who calmly placed the ball into the net past the oncoming keeper for the third. The fourth came from an Ozeki cross after he was released down the right. Getting to the byline he found Grønsund who gave the keeper little chance with his shot.

At the 20 minute mark the pattern of the game took on a change although it was hard to pinpoint why. Both teams made a series of substitutions and George undoubtedly dug in, while to a certain extent the Vag’s players started getting into that ‘we all want to score’ mindset that so often has the opposite effect. Whatever the reason, the score remained 4-0 with George resurgent to some extent causing Vags to realise that the game was far from won.

To King George’s credit, they started the second half the better team with most of the game taking place in the Vag’s half. Vag’s found it hard to regain the fluidity they had enjoyed in the first quarter and found themselves having to defend a series of corners which either Stieber gathered or they managed to hump clear. Despite this, another flowing move from George saw the ball pinged across the field at pace just outside the box to James Bates who hit it first time sweetly into the top right corner.

4-1 does not seem a score line to be worried about but at this stage the goals only looked like coming from George causing Vag’s to endure an anxious period. Against the run of play, they gained another free kick about 30 yards outside the box which Glenn curled in to restore the four-goal cushion. Shortly after this, Bates, as if to say “Anything you can do….” hit a bullet-like free kick into the top-right corner that had such force that it didn’t even dip, 5-2, and Vags were unnerved.

At this point, with 15 minutes to go, George pressed forward in order to capitalise on their dominance. Unfortunately for them, as is often the case when you go chasing a game, a Vag’s counter resulted in another run down the right and a shot which was again saved by the keeper but the ball was picked up by Vag’s front man Miyasaka. Miyasaka, who had carved out a few good chances earlier on coming close, kept his cool to finally put the game out of George’s reach.

In summary, a memorable game for a number of reasons: Muzzy’s ‘non-‘farewell; a Bates’ brace; textbook free kicks; a good refereeing performance; no cards; and no outrageous linesman decisions. No outrageous linesman decisions is perhaps debatable, however, because the George linesman did notably exhibit perhaps the biggest burst of adrenaline of the day as he quit his role in protest at being over-ruled by the referee. Throwing his flag to the floor for added effect he made a bit of a scene but the Vag’s players nearby had some sympathy because, in fairness to him, he was honest and most Vag’s players thought he was right in this instance. To his credit, and reflecting the spirit of the game, he did return to continue in good humour.