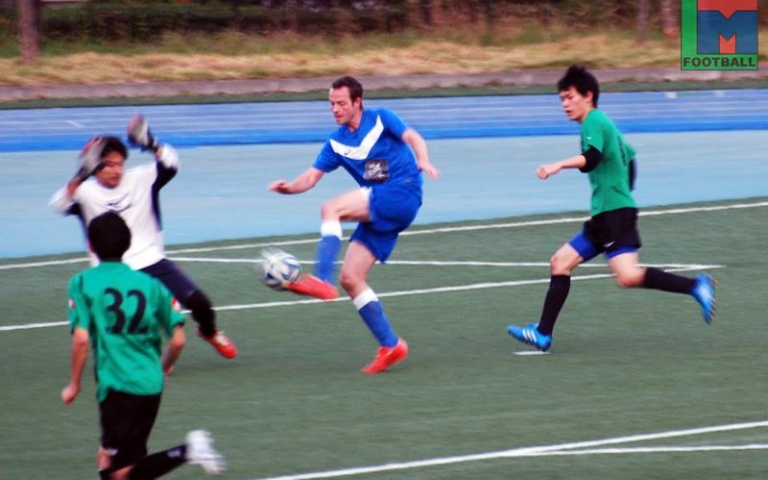 Although unable to make their chances count, BFC Vagabonds were able to hold Syu Syu Aoyama scoreless throughout the match, something that hadn’t been done since last season. Coming into the match Syu Syu were averaging over six goals a game and
the Vags were averaging nearly four a game, so the game stood poised to be a high scoring affair, but an early kickoff and a number of injuries seemed to slow both attacks down, and the Vagabonds defense remained well organized throughout to limit the chances that Syu Syu was able to create.

The Vagabonds were able to start off brightly, holding on to much more of the ball than last week, and continued to pressure the Aoyama defense, who was often content to play comfortable balls across their backline. Much of the early Vags pressure came
through their wingers as May and Etherington were able to make forays into the opposing half. Unfortunately for the Vagabonds throughout the match, Syu Syu Aoyama’s sweeper was often there to clear out any building pressure with some timely tackles. A brief attack from the Vagabonds caused an injury to a Syu Syu Aoyama defender who was unable to continue and caused Syu Syu to play a man down for a period of time as well.

The first solid chance of the match fell to the Vagabonds as solid defensive work from Coffey allowed him to gain possession and push forward before playing the ball to Etherington, who was able to place the ball past the keeper. His shot didn’t have
enough power unfortunately and a Syu Syu defender was able to clear off the line. The game settled again after that chance with Vags probing through the forward link up play of Grønsund and Rowley. Even without the majority of the possession, it was Syu Syu Aoyama who had the best chance of the game. Some brief interplay between their forward line allowed them to beat Thong on the right and the Aoyama striker tried to place the ball past the onrushing Stieber only to strike the post and have the ball roll across the face of goal with no other attacker there to finish.

Following that chance the spine of the Vagabonds team was able to hold up well against any of the Syu Syu attacks as most of their possession was quickly dealt with by Steeg and Nagoya in the middle of the pitch. Anything that made it through the midfield amounted to nothing as O’Connell and Glenn communicated and were well organized to deal with anything in the middle of the field. Vagabonds were the next to be hit with the injury bug as O’Connell made a charging run to deal with a lofted pass and was caught
in the head. After a few moments of treatment he was replaced by G. Williams, but there was to be no change in the organization of the Vagabonds backline. The final event of the half was to be a contentious one as Grønsund drove into the opposing area only to taken out by a tackle that was no where near to getting the ball. The referee waved play on much to disbelief of the Vagabonds players.

The second half began with the Vagabonds a bit on the back foot, but they were able to regain composure and pressure through the outside play of Bortnik and F. Williams. A few miscommunications between the backline of the Vagabonds were dealt with by some timely tackles by Steeg and Thong, and the resulting corners were collected by Stieber or cleared away by May and Glenn.

As the Vagabonds continued to pressure Syu Syu for a winner, they created a number of chances that were dealt with by the Aoyama sweeper or collected by their keeper. M. Williams was a constant menace down the left flank and Rowley had a number of chances throughout the second half that he was unable to convert and although he didn’t go down from the tackle, the Vagabonds players were again incensed about the lack of a whistle on what would’ve have been a penalty.

Although the Vagabonds continued to pressure Syu Syu throughout the second half, they were only to be rewarded with injuries as Coffey took an elbow across the facewhile challenging for a header, G. Williams was crashed through by the Aoyama keeper, and Bortnik went off with a minor injury to his knee. Fitness issues again began to show with the Vagabonds as a few members had to be substituted near full time, and they were unable to push for a winner near the end. Although still early in the season, the result leaves the Vagabonds on four points and in the relegation zone.

After a week off, the Vagabonds are back in action at Komaba Sub Ground against Dutch FC on Saturday October 24.