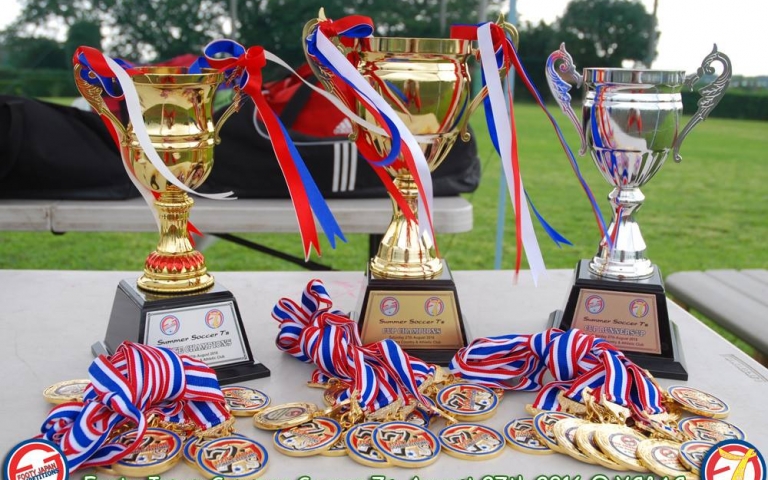 Some people fear the Summer 7s. A 9:30 kick off, an expected finish for finalists around 4pm all in 30 plus degrees, with constant sun exposure and playing the game they love on a hot artificial pitch. It’s now been 4 years since the above weather conditions have shone out from behind the clouds. Given the usual boiling Tokyo temperatures it seems like we have been lucky over the last few years. This year the rain even decided to join us.

The tournament kicked off at 09:35, a good effort considering we had 16 teams and a few new teams to the 7s format. Group A kicked off and Bloomberg blasted Subarashii FC with a comfortable 5-1 victory. Real Celts at KO only had 5 players. 5 players had dropped out and one was late. The circumstances put Oakwood Clash as strong favourites. Michael Dragsbaek put himself in nets for Real Celts and ran the game from there. If he wasn’t saving shots he was running down the wing trying to push Celts up the pitch. This tactic worked as they took a surprising 2 0 lead. Clash soon got to grips with the flying Dane and scored 2 quick goals and both teams settled for A draw.

Group B saw FC Thaitans secure a 4-0 victory over Tokyo International Masters who also had their problems with turning up on time but they did have 7 kitted up players on the pitch for KO. British Embassy were looking for a strong performance after some recent poor showings in the 7s tournaments. They beat tournament new boys White & Case 1-0.

Group C saw TZ FC take on Imperio. Imperio only had 4 players after a huge 6 players had dropped out on the morning on the tournament. It was decided that Imperio would play all their matches with help from random players. All their results would be a 3 nil loss and they would play in the Plate ¼ final but not progress to the Semi Finals. Group C saw the heavy weight battle of Panthers v Swiss Kickers. Both teams kept it tight and it was a goalless affair.

With a bonus point awarded for teams who scored 3 or more goals, there was plenty of attacking football on show, Bloomberg knocked 4 past Real Celts and Lions scored a quick 3 goals v the Charity 7s finalists YC&AC. The battle of the new teams saw FC Thaitans knock 4 goals past White & Case.

The big matches in the final group stage matches was in Group D. Lions had to avoid defeat to FC Shunsuke. If they did then they along with Shunuske and his friends would go through to the Cup if the Pumas failed to secure their bonus point v YC&AC. FC Shunsuke started well and scored an early goal as did the Pumas. Both teams extended their lead. YC&AC pulled a goal back, Lions were unable to do this as FC Shunsuke went on to win 3-0 with Shota Inoue scoring the 3rd goal. Footy Japan newest employee Ryosuke Urai knocked in a 3rd Pumas goal which promoted them to the Cup at the expense of Lions FC.

Just after 13:00 the skies were looking increasingly dark but luckily still no rain drops. The Plate matches kicked off. Due to the cooler conditions the aging team, consisting of some former and present TML legends, Tokyo International Masters were starting to dust off their cobwebs and were now showing their true potential by knocking out the Charity 7s Plate winners Subarashii FC. TZ FC who are a team of accountants kept their goal scoring numbers down with a 1-0 victory over hosts YC&AC. White and Case beat Celts 3-1. Real Celts did reach the dizzy heights of fielding a 6th player but he was soon injured and had to depart midway through the match. Lions played Imperio and progressed to the Plate Semi FInals.

7s specialist Bloomberg narrowly defeated FC Thaitans to be the first team to go through to the Cup Semi FInal. We hope to the see FC Thaitans in future tournaments. Swiss beat Pumas in a thrilling 3-2 game. It was end to end and the first time the Pumas had failed to reach a 7s semi final in 2 years. British Embassy defeated Clash 3-0 and Panthers defeated FC Shunsuke 2-1.

The clouds were getting darker and darker and at 15:05 with the first TML match kicking off in Hodogaya, the clouds opened and the rain began. I hope this is not an omen for the season! With the rain coming down, with tiring legs it was time for big lunging sliding tackles. Luckily no one was hurt and most the tackles were timed well.

Plate Semi finals saw Tokyo International Masters defeat TZ Utd by a few goals. By how many I do not know. The board maker pen on wet my wet laminate schedule had stopped working as had my pen on my wet schedule.

The first and only game to be decided on penalties was for the chance to meet the Tokyo Int. Masters in the Plate final. Lions and White & Case had played out a thrilling 3 all draw. White & Case who are all Lawyers by trade kept their nerve and soon had the Lions dismissed and sentenced to early showers after winning the PK’s 3-2.

The Cup Semi finals saw Bloomberg come short and lose to Swiss Kickers. Panthers kept it tight at the back and scored a breakaway goal to secure a place in the Cup final.

So final time. The Plate final kicked off first with the rain pelting down. With 2 referees involved in the finals and another referee leaving early. Sid Lloyd was to be the judge for the match. White & Case kicked off the match with an early goal. Tokyo International Masters were huffing and puffing but not making much headway into the firm defence of White and Case. Sid Lloyd was on top of things and overruling the odd bit of injustice. With 5 minutes left the ball bounced in front of one of the White & Case players around the halfway line. The way the ball just hung in the air, all the Wahl & Case fans who had huddled under the dry zone of a tent could see it coming as could all the players. The outside of the right boot hit the ball and it just flew into the top corner. Without doubt the goal of the day. No more goals were scored which meant Wahl & Case claimed their first bit of FJ silverware on the 7s debut.

Like the group match between them earlier in the day there wasn’t much between Swiss and Panthers. Swiss scored early and the Panthers scored an equaliser midway through the game. Swiss then upped their game, Panthers were holding on but Referee Simon blew the final whistle. The match then went into a 5 minute golden goal stage. I missed the final moments of this match as I was collecting stray footballs but I heard Panthers continued to hold on but Swiss’s pressure paid off and scored the goal which made them retain their Summer 7s crown.