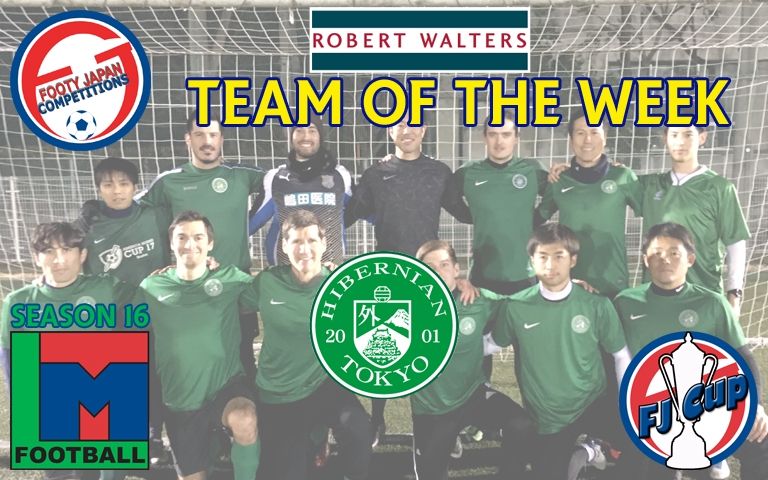 An exciting TML weekend once again. Nepal United scored on their first possesion with ten men against King George. Both of Shane FC's goals came from the leagues biggest divers. And FC Sagarmatha won their bottom of the league derby against Fussa FC.

This weeks Robert Walters Team of the Week goes to Hibernian FC. Like Nepal, Hibernian FC scored on their first possesion which set the tone for things to come. Hibs are in a tricky position in the standings. Kanto Celts (first place) have 34 points with 14 played. Hibernian FC (second place) have 32 points with 14 played. Pumas (third place) have 31 points with only 13 played. If all three of them win the rest of their games and if Kanto Celts tie Pumas in their match, the top three teams will be tied in points. Should it ever come to that, the league winner gets determined by goal difference (despite false rumors being spread about having a tie breaker match...).

Hibs were aware of their situation. Pumas currently have the healthiest goal difference out of all the teams and Hibs were far behind in terms of goals. For Hibs to have a chance of winning, they needed goals... lots of them. And goals they got.

Over the course of 80 minutes, they scored a total of 13 goals making it the biggest scoring game of this season. As I was watching from the sidelines with my King George Pompoms, Hibs looked like they were on pace to score 20 goals by the final whistle. In hindsight, they probably should have.
But neither team were on their best performance. Musketeers looked like they were missing their number one goal keeper. And Hibernian FC had multiple 1 on 1's with the keeper that even Sid Loyd could have buried in the back of the net.
Hib Captains Kirk and Luciano were heard frequently telling their players, "We need goals. We need to score that." It certainly seemed like some of their players got less focused after the goal difference entered the double digits. In fact, the last 10~15 minutes, Hibs slowed down considerably in their goal scoring. Not their best display, as Hibs themselves would agree, but a solid preformance and a record breaking number of goals earn them the Robert Walters Team of the Week.

Division 1 is in an interesting position with the top three teams close in points. Being fully aware of the goal difference rule, we can expect that these three teams will not be looking for mere wins anymore... they will be hunting for landslide victories to pad their stats.

You can also view some of the match photos on our facebook page. Link is just below!
https://www.facebook.com/pg/footyjapancompetitions/photos/?tab=album&alb...2411255895593326

And I've also uploaded a few of the Hib goals on youtube:
https://www.youtube.com/watch?v=nOn3HOUxov8

Congrats to Hibernian FC for their Robert Walters Team of the Week Award!

Robert Walters Team of the Week (May 22)

Robert Walters Team of the Week (May 15)

Which team gets the most cards?